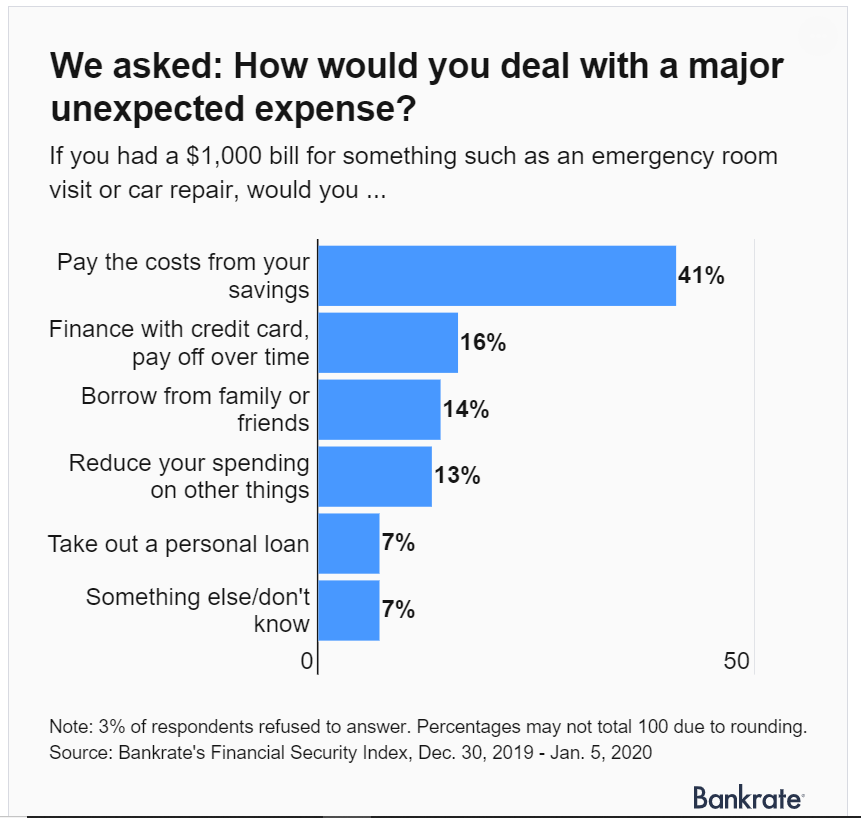 Everyone has an emergency pop up from time to time.  The car needs repairs, you broke your arm, the toilet is backing up or the roof is leaking.  An unexpected emergency can cause a serious problem for lots of people.  We have talked about the savings rate in America before and how so many people have so little money saved for retirement or unexpected expenses.  A new study recently released by bankrate.com paints a very bleak picture for people in the United States when it comes to funding an emergency. We you can read the study in the post above or we can give you the TL;DR summary here:

Having an emergency can be expensive.  The average cost of an unexpected emergency expense is over $3,500.  That can put a pinch on the wallet of even the best savers in our country, yours truly included.  Over 30% of the respondents to the survey said that they would have to take on additional debt to cover the expense of a $1,000 emergency.  Many people even turn to fundraising services like Go Fund Me to help with unexpected problems.  While all of these are options in a time of need,  what we really need to look at is the cause of the problem, our ability to save.  So many people are burdened with debt and debt collectors live to make money off the shame of having debt.  Funding unsustainable debt keeps up from being able to get our lives back on track and increase our savings.

That’s where we step in.  Bankruptcy is viewed by many as a last resort.  Something that is shameful or should only be considered if you’ve exhausted all options.  The truth is, Bankruptcy is a good financial tool that can help you get your life in order and get a fresh financial start.  Harmon and Gorove offers Chapter 7 and Chapter 13 bankruptcy plans to help you get your life back in order and hit the reset button on your finances.  Contact the attorneys at Harmon and Gorove today for a free consultation.  Let us help you sort out your life so the next time a $1,000 emergency comes along, you’re prepared.

The average American family is struggling with savings.  While as much as 70% of people agree that the economy is humming along at a record pace, many people often do not see the real benefit that Wall Street is reaping in their own bank accounts.  Here in the United States, the economy may be doing well but the savings rate reaches has reached a new low.

A recent study by the Federal Reserve says that the average American consumer is unable to cover a $400 emergency expense without tapping credit or having to sell some possessions. Many attribute this to the rising cost of living and the recent uptick in consumer debt and student loan debt which are both having a negative effect on the savings rate.  Student loan debt in America now tops 1.4 Trillion dollars and is causing many people to not be able to purchase homes and cars and is even blamed for delaying marriages and keeping people from starting families.

Another disturbing trend in the savings rate in America is the fact that more than 50% of people have less than 1,000 dollars in savings.  Despite the fact that more Americans are feeling confident in the economy, a full 57% of Americans don’t even have 1,000 dollars saved. This is disturbing because many people still expect to retire at or around 65.  The average social security check people receive in retirement is approximately 1,400 per month.  While that will continue to increase as time goes on, it is a sobering thought that many people who are late to get into the savings game may have to finance their retirement on just under 17,000 dollars per year.

As we stated earlier, most people are feeling more financially secure but they are failing to save.  You can make that savings easier if you contribute to employer funded or matched retirement plans which save your money for you, keeping you from ever getting your hands on it.  If you work for an employer that does this, we highly recommend you using this. If you are having to save on your own and you keep finding it harder and harder to put money away you may be a good candidate for bankruptcy.  Bankruptcy can be a positive thing for your finances and it can help you eliminate may of the unnecessary debts that are holding you back from creating a savings plan. If you are struggling with creating a savings plan, give us a call.  The attorneys at Harmon and Gorove have decades of experience helping people out of debt and making meaningful financial changes in their lives.

What is Chapter 7 Bankruptcy?